"It is Impossible to Love and to be Wise" - Francis Bacon

Alright - So my original plan was to write about the troubles... err.. I mean JOYS I've recently experienced trying to get appropriate premises nailed down. You remember how they were the last time I wrote about it? Anyways, we've moved quite aways beyond that and I'm excited to post about it - but before I do - I just had to take a time out and talk about swineology, a.k.a. baconophilia,  d.b.a. PORK LOVE!

It started when my brother sent me an email about his recent visit to Toronto - where, as this picture proves, even the Vegans dig on swine, no matter what Samuel says. 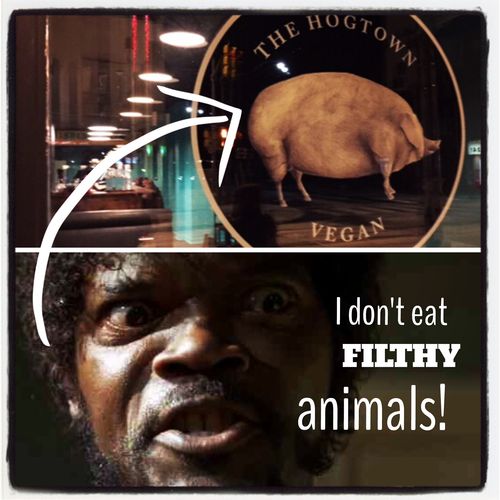 I'm rather shocked by this restaurant's aesthetic, I have to say. I'm sure that the food is great (my spies tell me that it was true in fact), and I can even come up with some southern-style ideas that are dairy, egg and meat-free, just off of the top of head! Braised collards, étoufée, red-beans-and-rice, mirliton. Plenty of delicious options there! So, I don't get it - Why porkify your message?! Because they (despite being animal-hugging vegans) have fallen prey to bacon-maaaaaaaaaaadness!

Bacon-madness shouldn't be anything new to you, let's get that out of the way. There's been plenty written on how bacon has seeped into every aspect of our dining experiences over the past decade. Bacon salad, Bacon Apple Pie, Bacon Jam, Bacon Brownies and Bacon Ice Cream (the last one actually first came out in 1976 as a joke, but thanks to Heston Blumenthal, now it isn't). 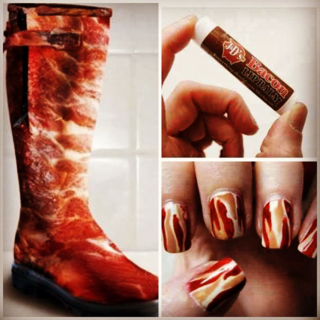 Marvelous ways to celebrate without eating a bite!

Anyways - this email and vegan-photo prompt set me on a dazzling, rabbit-hole-esque internet adventure where I tried to relive as many "Now, surely, THIS is the height of bacon-madness. Nothing can be more bacon-mad than this" moments I've had in my life.

And yeah, there were waaaaay more than I expected.

Ranging from the arguably non-edible, where youtubers Epic Meal Time headed to my old alma mater to make a campus building out of bacon (and poutine and meatloaf, but who's counting - check out the section around 1:21 where they argue about whether they have enough bacon), to Zingerman's yearly ode to the salty, belly, treat: Camp Bacon.

Feel free to watch the video below, but the faint of stomach be wary.

But amongst the many shocking options, from the Bacon Bra (I don't want to link this - just google it if you must) to Bacon Toothpaste, I did find one thing that actually ought to have more support.

Not that my limited readership will really help this project along, but it doesn't hurt to try: 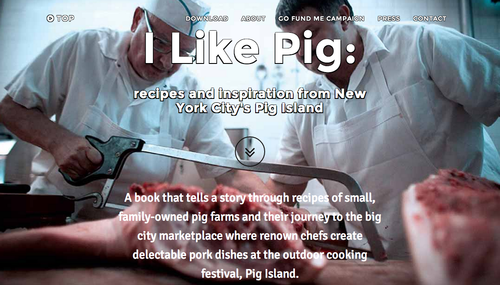 Bascially, these guys are trying to raise the profile of heritage pork farmers who are doing the right thing, animal-husbandry-wise. Obviously this is something that I want to support. And they're trying to bring their project to the UK so double-whammy there. I don't 100% agree with their prospective itinerary once they get here (Jimmy's Farm? Really? Though the Gotts, that's Sillfield Farm, are definitely porcine royalty) but it's all for a good cause. So I'm definitely going to donate some funds.

At some point in the future, be prepared to see me in a I LIKE PIGS T-shirt.... Yeah, yeah, I drank the koolaide. I AM THE BACON MADNESS. This like what, shocks you?!

The comments to this entry are closed.