Home Archives Profile Subscribe
"It is Impossible to Love and to be Wise" - Francis Bacon
"Always Do Things Right...

"The whole difference between construction and creation is exactly this: that a thing constructed can only be loved after it is constructed; but a thing created is loved before it exists" - Charles Dickens

There is one step in the voyage towards self-employment and own-business-hood that cannot be avoided. That is to say, if you're going to purchase a whole pig's carcass, from a British farmer who lets his heritage breed animals frolic in the forest, doesn't use antibiotics except for therapeutic reasons, and refrains from feeding them animal flesh, you need a place to put the pig.

And generally speaking - if you're going to try and sell what you make out of that pig - it cannot be just any old place. It needs to be the right temperature, have proper ventilation, pest control... (I really cannot stress the amount of etceteras I could add to the end of that). And, arguably most important of all, you gotta lay all that down on top of appropriate flooring.

Getting both of those things (a place and a floor) has been an interesting adventure.

Sometime ago - I mentioned that I tentatively asked to become a part of an amazing food community based in South London (I say 'tentatively' because even as I asked them to let me in, I knew that personal reasons might well have kept me have been able to accept). At any rate, they said 'yes', my personal situation resolved itself unexpectedly, and a few weeks ago this happened: 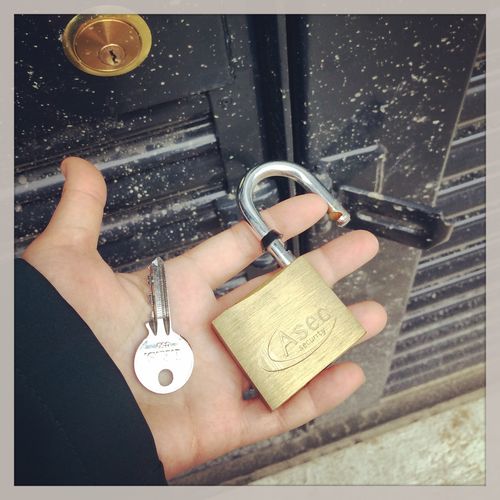 Anyhoo - I have already shared pictures of what a total construction zone the place was to begin with (they're here, in case you'd like a refresher). But even though those keys let me into a much cleaner space... 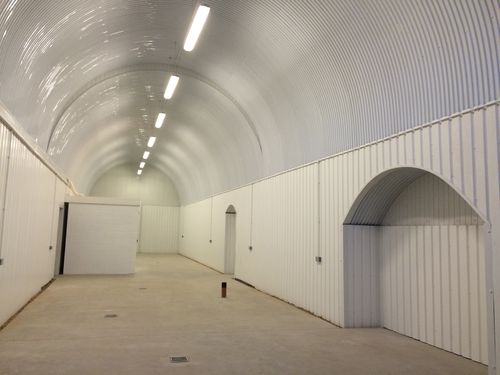 it still wasn't the kind of place that you could butcher a pig in. Well, you could, but in this adventure, I've learned that there is a very fine line between professional and psychopath, and it's best to build up as many accoutrements as you can to keep yourself from veering towards the latter!

Probably not the moment to share that picture of me wearing a pig's head.

What I needed, first and foremost, were drains and floors. Drains are pretty key, by the way - they allow you to keep a much cleaner space than you might realize. Think about the difference between cleaning your tub and your bathroom floor. Way easier to keep the tub clean when you can just run the water all over that bad boy and it disappears, no?

But it's not like you can just drill down and pop a grate in there. They have to be in the right place, leading to the correct sewers... and it costs a whole heck of a load to drill through whatever is between you and the underworld. More than I've spent on anything for this business so far - and at the end of it, you're still basically just looking at the exact same arch. I could post a picture of the finished work - but it would be like playing one of those 'what's different' identical photo games.

Next came the floors... non-slip, scrubbable, resilient and hard-wearing. And blue! So pretty. 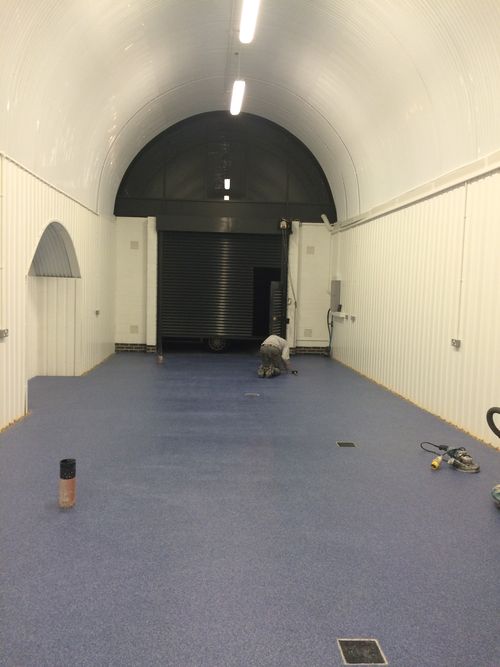 I don't think I will be able to really communicate how much stress and effort and money and time it took to get from the simple key holding stage to the beautiful, albeit empty, arch above. Hours and hours of phone calls, having to pre-muthafrickin'-pay! (yeah, that's a lot of money to watch go out of your account without anything to show for it), long-distance arranging of keys and several successive quotes where the price just kept rising.

I particularly enjoyed* the bit where they took 16 hours to lay the first layer, than soaked the paperwork they needed me to sign with chemical, left with the floors only half-finished and then left them that way for three weeks. And, since they forced me to pay in advance because I didn't have any credit history as a company, I was basically up the creek without any leverage, or a paddle, or whatever.
Sigh.
But all's well that ends well, right? Next time we'll talk the balance between buying the best of everything, satisfying legal requirements and staying on budget. They'll be diagrams! Ooh! Razzle, dazzle! Swish! You'll love it.
*Sarcasm. Just in case that wasn't super obvious. (oops! More sarcasm! haha)

The comments to this entry are closed.